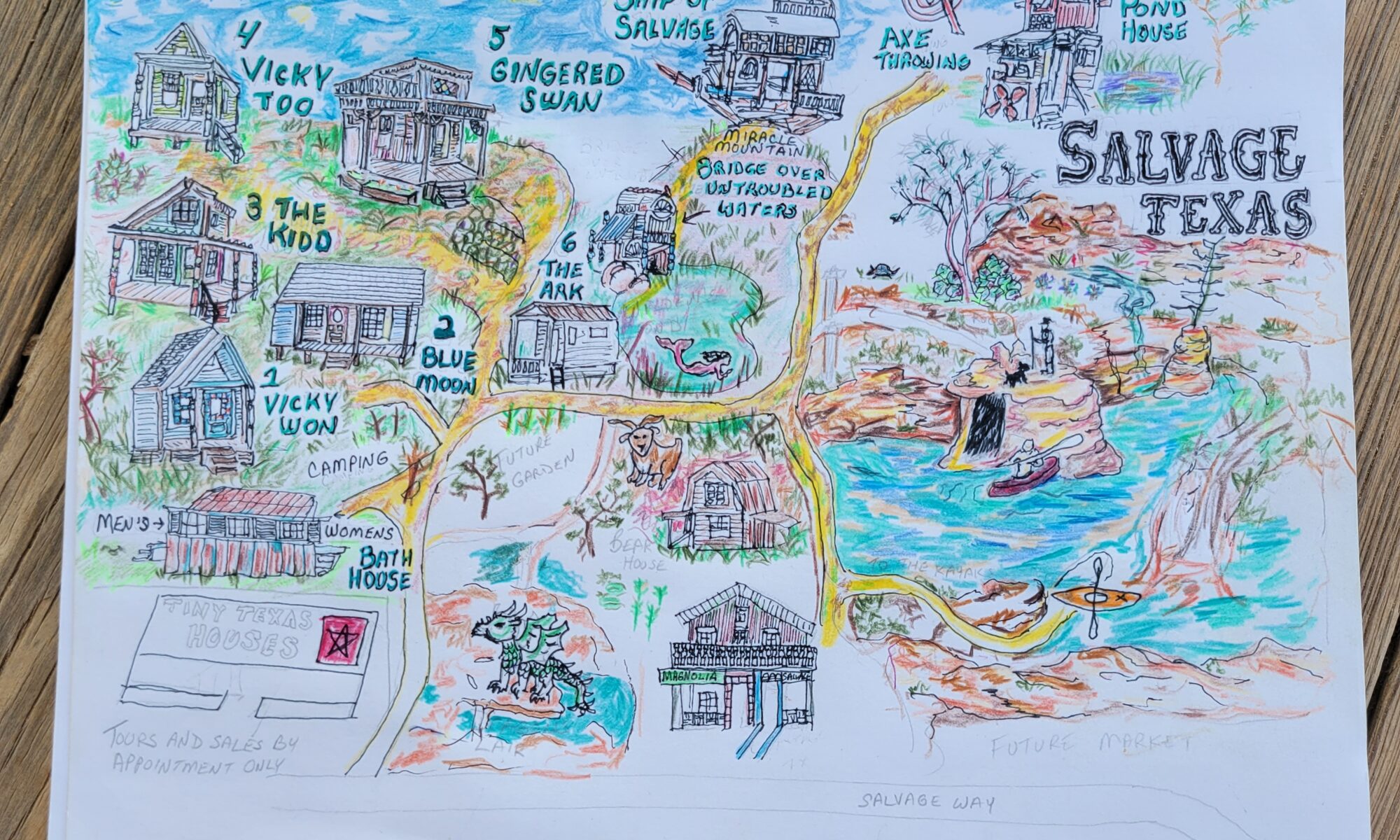 After years of warning of these times, of downsizing and getting healthy, physically, mentally, & spiritually, did you listen and get ready? Bang! SHTF is near.

“The Shadow knows” it is the energy hidden in that which absorbs the Light and transmutes it into reality… instead of just a negative image on a canyon wall. Make the Canyon your shadow will be cast upon and thank the Son or Sun for the energy to do it all. At 64 there seemed to be a great reason to build out the western wall of Fort Salvage, a defendable perimeter in a fantasy world of Salvage, Texas where the past makes an amazing future possible, knowledge, experience, and salvaged materials that make nearly anything possible without going to China to get parts.

Imagine that, an example of All American made houses, art, and solutions for others to use freely now that the times will call out to others to salvage their future from the treasures of the past. Indeed they are but a dream and a bit of action away.https://www.youtube-nocookie.com/embed/Hp31h_a6Wbg?rel=0&autoplay=0&showinfo=0&enablejsapi=0

Can you dig the point of the example of what can be done with your imagination? Somehow the idea of this was to create an example of what is possible for those who may take a different path as the world goes through massive transformations, storms I predicted and warned of, prayed others would listen to, and downsize in anticipation of them coming. They are at your doorstep. See them through the peephole yet?

Capture a color in the glass, a texture, a shape not flat, and do it without electricity to help, indeed a path that few could take to find their path to wealth.

Imagine a fantasy land where frogs, turtles, beaver, otters, birds, skunks, and much more roamed the land where little lived a dozen years before. A green place full of life, water, food, and a plan on how to live a simpler healthier life. Wi, all the “I”s who get to see or Be here. Salvage, Texas where you see the example of what can be when you are Free. You can come, dream, wander, plan, and even order the windows and doors to your future tiny organic cottage in the woods… where ever your paradise will grow.

What are you doing as the fireworks start? Where does your wheel take you when you turn it away from the desk in the office and set off into the world of passion and imagination? What happens when you just want to give up, no idea of why you should go on? YOU are a Part of the Play… be a critical Part! Dreams of Wibblry and Wub from a story of a boy who left and returned once he understood there would one day be a reward worth living for… a purpose. Find yours now!

What are you going to do once the chance to prepare is over and the time to practice the things you learned comes? Will you have the courage to leap the Chasm at the Fringe where others you know fear to go, the chance to leap unto a higher realm of consciousness and health? Do it. Travel into the future of your life by creating one you want to achieve.

2 months of 60-hour weeks in a cab, Darby goes In-Sany

Help those who can not think or see while there is time to get them awakened before fear takes over. Share your wisdom to empower, not enable… and teach others how to be strong.

After a week of great pulses from the Schuman resonance monitors showing that last night some people may have gotten agitated and lost it, as the world turns, some claim it is lightning, some claim other things cause it but what it causes, well that turns out to be physiological and psychological in consequences as this is relatively a new phenomena, not seen prior to 2017 and growing both in intensity and frequency as time goes by… quickly I should add.

The consequences to society as people pop like popcorn and take out their anger and frustration on others, random acts of madness as well as those planned and programmed into weak minds. Time to be strong… take a deep breath, decide on a path you can imagine, regardless of what others think, take action soon… positive action so as to thrive as the waves of energy hit instead of having them drive you crazy.

With that, Wii closed the purple-painted posted gates to Fort Salvage, Texas. I wish you all well in the coming weeks of confusion and utter fear and chaos, desperation expressed with a bang, anger, and fear. Stay clear in these trying times.

Time to think about who your friends are, if you want someone at your back with a gun, or at your side, but for sure, who is in front and armed in these times. Open your eyes and pay attention. Courage, not fear is the only way to be on my team… for cowards are the most dangerous liars and thieves in the world for they are liars in the end, not having the will to die for what they believe in and who they love, who they have sworn to protect. Texas is a good place to find good friends. Peace be with you.